Epic Proposals From the Last Decade 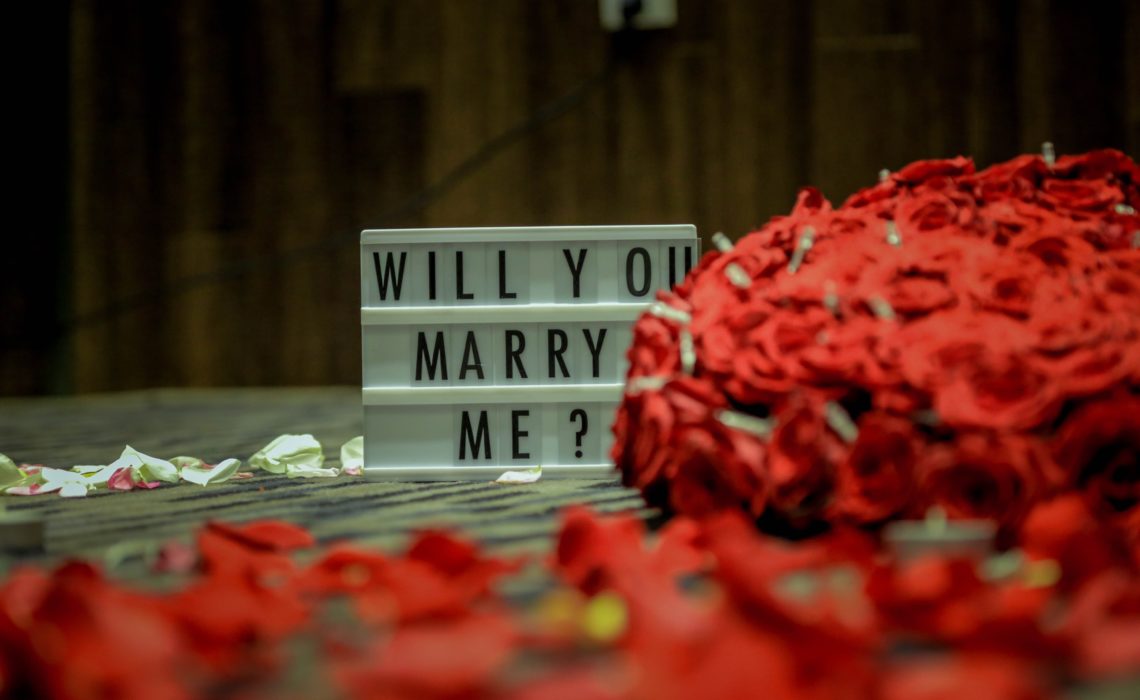 The last ten years gave us a wide range of wedding trends. Brides and grooms started to blend their own modern style with age-old tradition—resulting in unique weddings around the globe. But before those ceremonies can be filled with leather jackets, cupcakes instead of cake, and two wedding dresses, there had to be a proposal. Some of those proposals happened in restaurants, backyards, and beaches. But a few epic proposals stand out from the past ten years.

Each of these epic proposals includes a video—another trend from the past decade. But the videos alone don’t make the proposal epic. Instead, it’s the time and personal touches that went into each grand gesture. Take a look at some of our favorites. Before you press play, though, you should grab some tissues. You’re going to need them!

On the outside (or inside!), Home Depot doesn’t look like the most romantic place for a proposal. But it’s where Spencer and Dustin went as part of their first date. So it’s only fitting that Spencer pop the question there, with 30 friends and family dancing to “Somebody Loves You” by Betty Who.

Dustin, of course, said yes—and one of the most epic proposals turned into an epic engagement and wedding. The proposal video went viral, then the couple appeared on Ellen and was (symbolically) married by Queen Latifah at the Grammy’s. Their lives seemed to have quieted down a little, though—at least from the public eye. Since 2016, their biggest—and most epic—experience has been fatherhood.

Dean’s concept for proposing to Jennifer is actually a simple one. But how long he took to propose makes it one of the most epic proposals from the last decade. On January 8, 2013, Dean made a video, professing his love for Jennifer, and his intentions to marry her.

And to prove just how true that was, he recorded himself proposing to Jennifer 365 more times—once a day for a year. Talk about dedication! He used a small whiteboard to write the date and proposal, and displayed it while doing day-to-day tasks and chores. They all lead up to an in-person whiteboard proposal during a family trip to Aruba.

As a cinematographer himself, Tyler’s proposal to Haylee also includes a video made just for her. But that’s not what earned it a spot on the epic proposals list. Tyler and Haylee met when they were 12, and have been either close friends or dating ever since. Well before 2015, Tyler knew he would eventually propose. And he always envisioned asking Haylee’s dad for his blessing to become part of the family. But when her dad unexpectedly passed in 2014, that dream was no longer possible.

Instead, Tyler dedicated his proposal video to Haylee’s dad, promising, “most importantly, I’ll make you proud to call me your son.” The video captures the proposal, other moments from their relationship, and even Haylee’s siblings all giving their blessing to Tyler.

Jake planned to propose to Michael before the upcoming Chicago Bulls game. Michael is a dedicated fan, and the two had tickets to see the game live. But life had a much more epic evening planned out for them.

According to the Bulls’ spokesperson, the basketball team was moved by the couple’s story, and reached out to Jake about a live in-game proposal. Of course, Jake said yes and began re-planning his proposal. (And then, shortly after, Michael said yes, too!) Their proposal is one of the only same-sex proposals to happen during an NBA game—making it both epic and historical.

A Surprise Wedding in 48 Hours

Gabriel’s proposal-then-marriage to Marissa brought her around the world in just 48 hours. In his initial video, Gabriel explains that this trip includes everything that’s important to her: “love, adventure, travel, and fashion.” Well, he didn’t disappoint. She started in New York City, traveled to Miami, and ended in Paris. He greeted her in Paris, where their families joined, and the two got married on the spot!

Although the whole adventure ends with a surprise twist—a proposal and a wedding!—the couple did receive criticism for the elaborate ordeal when they returned home. We aren’t taking sides, but included it on the list because it was a proposal and it was epic!

Who knew there were so many types of epic proposals! Some only lasted 48 hours, while others lasted an entire year. But every proposal was highly personalized and romantic. And that’s what really counts!

Do you have an epic proposal story? Was there one from the news that we missed?

Weddings
Pros and Cons of Getting a Prenup
Travel, Weddings
13 Things to do Before Going on Your Honeymoon
Weddings
A Guide to Caring for Your Engagement Ring
Close