Do You Even Need a Wedding Party? 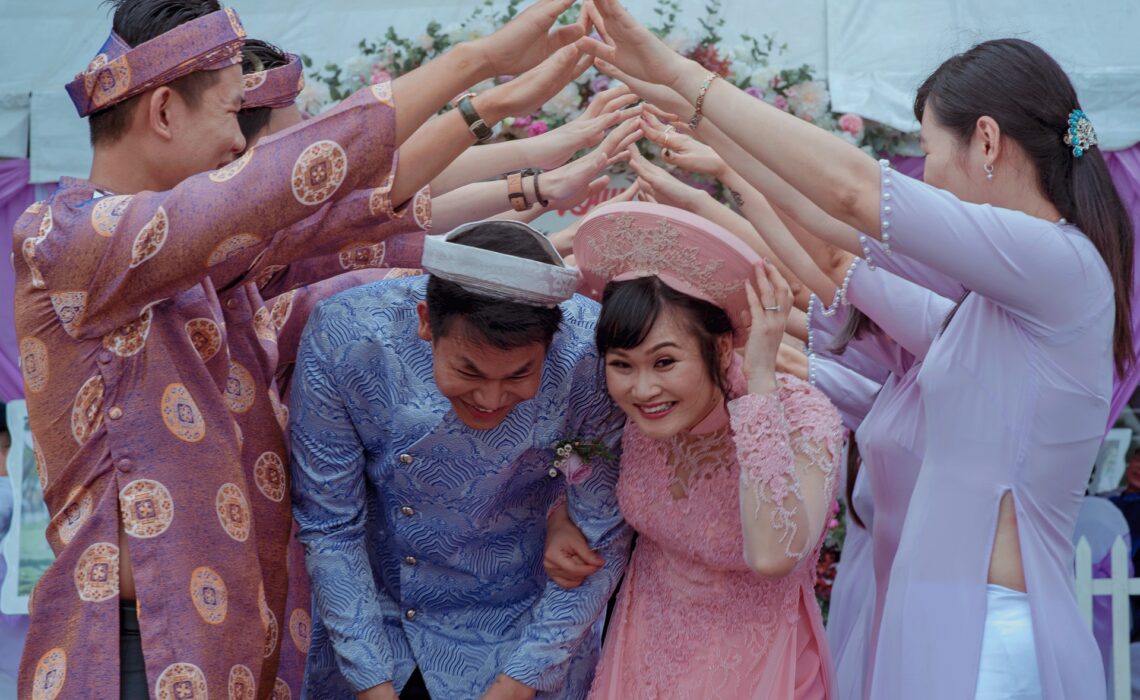 For centuries, couples have exchanged vows while surrounded by friends and family. Having a wedding party—complete with a maid of honor and best man—is such a widely followed tradition, not having one can feel wrong. But, like we always say, this is your wedding. If you don’t need a wedding party, then skip it! Of course, you might not know if you need one, either. You might not even know if you want one! That’s why we created this handy guide to help you decide.

Before we dive into the history and purpose of a wedding party, let’s define the term. Typically, a wedding party includes any bridesmaids or groomsmen from either side. It also includes maids or men of honor, best men or women, and any younger members tossing flowers or bringing flowers. None of this is to be confused with a bridal party, which usually just includes the friends and family standing up on the bride’s side. In other words, a wedding party is everyone who is part of the ceremony, minus the couple and the officiant.

The History of a Wedding Party

According to Mental Floss, the wedding party tradition likely began in ancient Rome. That’s as early as 8th century BC! Per the ancient law, there had to be 10 witnesses present at the marriage ceremony to make it official. While the number of required witnesses is much lower today in the United States—coming in at just two in-person adults—having a group at the altar with you hasn’t changed a whole lot. Of course, a wedding party with 10 people is still considered a moderate size today. It’s common for couples to have smaller wedding parties, with only four or six in total.

Ancient Roman traditions account for the matching dresses, too. Mental Floss explains that matching attire was meant to confuse anyone who wanted to harm the couple. This can include enemies and rivals who may try to kidnap one or both parties, but it also includes any spirits or supernatural entities who wanted to harm the couple. If there are six people all dressed the same, how do you know which one is the bride? Or the groom? Granted, modern-day ‘maids and ‘men don’t usually match the bride or groom, but everyone in the party usually matches each other.

The Purpose of a Wedding Party

While the roles of the wedding party have changed, some of them are only slightly different, according to Mental Floss. From Biblical times to ancient Rome and 16th century Germanic Goths, the wedding party was established to help out the bride and groom. Although some of those traditions are bleak—like stealing the bride—others were innocent, like holding the bride’s gloves during the ceremony.

In modern-day weddings, the ‘maids and ‘men support the happy couple during the planning, right up to the Big Day. Some of the tasks include planning bachelor(ette) parties or wedding showers, choosing dresses or tuxes, and handling other day-of logistics. (Like, for example, fielding parking questions from guests so the couple can focus on getting married.) So, if you’re worried about getting everything done, you just might need a the extra help!

Should You Have a Wedding Party?

It’s always a good idea to think about what yours would look like, if you did have one. Who would be in it? How much are you willing to spend on it? As you think through the practical elements of a wedding party, you may decide that you don’t need one, after all. On the other hand, if picturing your BFFs in matching dresses really excites you—that’s OK, too. Before you make a final decision, ask yourself these three questions; their answers will guide your choice.

How many friends and family members do I have?

A wedding party can be as big or as small as you want it. (This is your wedding, remember?) But that might be the problem—do you have too many close friends and family members? Maybe you don’t want to choose between your 10 BFFs or have a 20-person party! On the other hand, if you have four close friends, and your fiance has six, you might not want an uneven wedding party. Consider who you would ask and what that final number would look like before deciding.

What would I want them to wear?

We promise—we aren’t skipping ahead with this question! If you can easily decide what the ‘maids and ‘men would wear during your special day, you’re one step closer to a decision. On the other hand, if the thought of choosing more attire on top of your own makes you break out in hives—you may want to skip it. Some couples have a clear vision of their Big Day, details and all. But if you want to keep it simple and keep the decisions to a minimum, then skip the wedding party altogether!

What is my budget?

Although the wedding party usually pays for most of the expenses, it isn’t free to have a wedding party, either. Typically, the ‘maids and ‘men pay for their attire, transportation, lodging, and even some (or all!) of the bachelor(ette) parties. However, you still have to add some line items to your final budget.

For example, you will have to pay for their meals at your wedding and a rehearsal dinner the day before. Plus, many couples give their friends and family members a small gift for being in their wedding. You may even get them a gift when you ask them to be in your wedding, too. Having a wedding party certainly isn’t the most expensive part of a wedding, but the cost may be a deal breaker for budget weddings.

Like so many details about your wedding, there is no right or wrong answer. There is only the answer that is right for you! Choosing to have a wedding party isn’t a small decision. It will add items to your budget, and you’ll spend time shopping and communicating with your friends. On the other hand, you’ll have a group of your besties by your side every step of the wedding-planning way! Carefully consider all of that before making a decision.

What other questions are you asking yourself before making your decision?