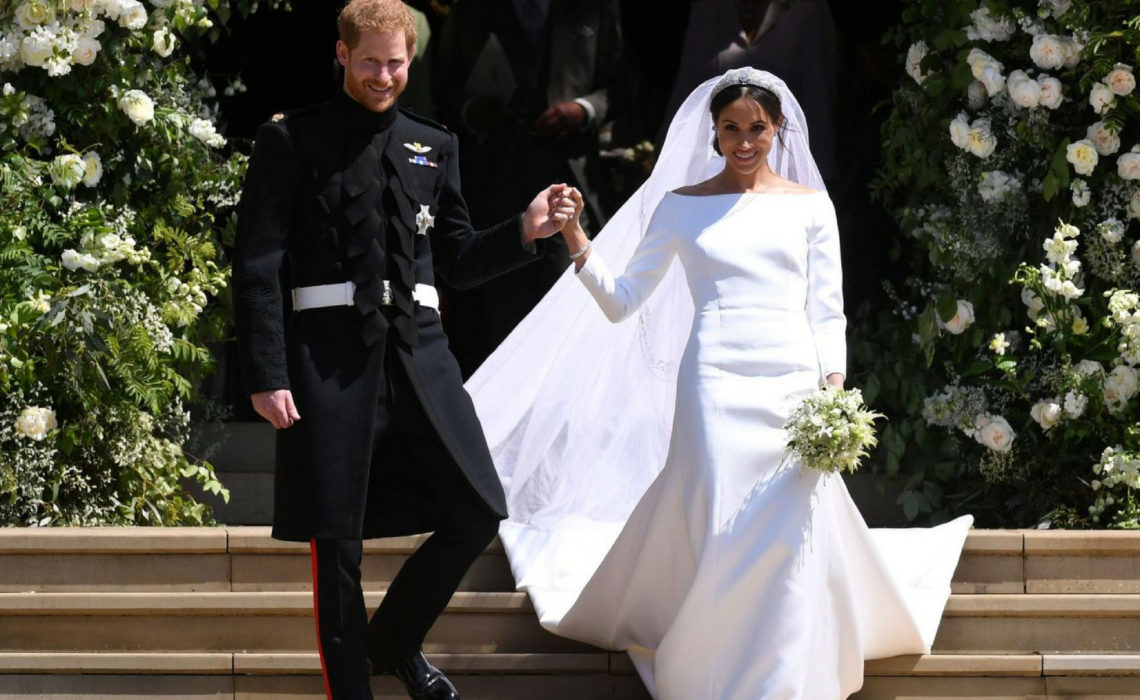 If you haven’t heard by now, the Royal Wedding took place at Windsor Castle in the United Kingdom this past Saturday—congratulations to Prince Harry and Meghan, the Duke and Duchess of Sussex. The press is calling the wedding, “A Modern Fairytale”, because it was full of new and old traditions. Since we are still in the wedding spirit, we thought it would be fun to compare American vs. British wedding traditions to see how the different celebrations play out. THE DUKE AND DUCHESS OF SUSSEX / ALEXI LUBOMIRSKI

Instead of a formal event held in the afternoon or evening, British weddings are traditionally held in the morning, with the first meal that follows called the “wedding breakfast”.

I don’t know if you noticed, but a large percentage of the women attending the Royal Wedding wore beautiful hats. Wearing a hat or elegant headpiece to accessorize one’s dress is a common British tradition that has been around for years. Instead of tuxedos, the gentlemen donned a morning jacket with tails, a waistcoat, and trousers. This is a traditional 3-piece daytime formal outfit for British men.

The Bride is Always First

The bride always walks down the aisle first in a traditional British wedding. In the recent Royal Wedding, Meghan walked down the aisle with her flower girls and pageboys behind her, carrying the train of her dress. Traditionally, the father of the bride, best man, and groom are the only ones to give speeches at a British wedding—not the maid of honor.

A British wedding cake is most times a tiered fruitcake—however, Prince Harry and Meghan displayed a non-traditional lemon and elderflower cake with buttercream and fresh flowers. In comparison to some of the British wedding traditions, Americans tend to operate a little differently—however, some traditions are being done away with over time.

Instead of a “wedding breakfast”, American weddings typically hold a rehearsal dinner the night before the wedding. The groom’s parents traditionally plan the rehearsal dinner.

The saying goes, “Something old. Something new. Something borrowed. Something blue, and a silver six-pence in her shoe”. If the bride holds or wears these objects on her wedding day, she will have good luck. A Tux and Tie

The groom and groomsmen traditionally wear a tuxedo, bow tie, vest or cummerbund, and patent leather shoes. However, at some semi-formal weddings, a suit and tie are acceptable.

The Bride is Always Last

In traditional American weddings, the bride walks down the aisle last. The flower girl, ring bearer, and bridesmaids all walk ahead preparing the way for the bride. It’s time to make a toast to the bride and groom—traditionally the maid of honor and best man make the speeches during the reception.

The groom traditionally removes the garter from the bride’s leg and tosses it out to the single men at the wedding. Whoever catches it will get married next! American wedding cakes are traditionally a layered frosted cake with a cake-topper on top. However, lately, couples are moving away from the traditional cake and opting for something less traditional—like cupcakes, pies, or pastries.

As you can see, there are many different wedding traditions that couples can choose to follow. Whether you are American or British—the wedding ceremony and reception is bound to be a spectacular time.